So I did some prep work (and some prep fun) for NaNoWriMo this year. And good thing, too. Because I had my best “November” of writing since I’ve been keeping track. I didn’t “win”, not by any stretch of anyone’s writerly imagination. But I did get 32,578 words written during my own somewhat modified NaNoWriMo.

“Now, I don’t want to get off on a rant here…,” but there’s a reason I’m writing my NaNoWriMo recap in the middle of December. You see, in addition to Thanksgiving, which most NaNoWriMoers have to deal with, November this year also happened to be the start of Open Enrollment for the Affordable Care Act. This matters because the company I work for is heavily involved in selling health insurance. I had been working a lot since, oh, August, but for the first 10 days of November, I actually managed to go over 1,667 words five times. 50% success. That would get me to 25,000 words by itself, but I was managing 500-900 even on the non-#winning days. But things got turned up (not turnt up unfortunately). Over the next 12 days, I only had the time and energy to get 3,771 words. Total. I would get up, go through code reviews in the morning, go to work, do work, come home at 8 or 9 each night with a brain so fried you could eat it.

One nice thing is that the government is pushing back the start of Open Enrollment to October 1st next year, so hopefully things will be under control by the time November starts and I’ll be ready to set a new PR in NaNoWriMo.

For reference: last year I had 26,847 … So if I maintain that rate of improvement, I’ll be up to 50,000 in a mere 3 years! If only someone would start a MayNoWriMo… I know there’s JulyNoWriMo, but according to the site it is no longer actively maintained, and there were only 90 people who participated in 2014 compared to 148 in 2013. Not a positive trend. MayNoWriMo would be 6 months after (and also before) NaNoWriMo, and it also seems like it would still be the kind of weather where you don’t feel back that you have to stay inside and write all day since you’ve still got three months of summer ahead (though I suppose it’s basically the same as November in the Southern hemisphere). Also, in the US, you get Memorial Day off, which I think would be better than Thanksgiving since it’s a lot easier to say “Hey family, I’m not going to fly out to see you for Memorial Day” than it is if you try that with Thanksgiving. Maybe not a good time for college students who have Finals, but when I was in college, I wouldn’t have had time for NaNoWriMo anyway. (And I feel like college students probably travel at a higher rate than the average American over Thanksgiving, while during Finals, you basically lock yourself in your room or the library and don’t let anyone talk to you… Which sounds an awful lot like NaNoWriMo!)

I know I could do MayNoWriMo by myself, and that there are a lot of writers who probably crank out close to 50,000 words in any given month anyway. But I am not one of them. I like having the excuse that it’s a Nationally (Internationally) recognized thing that I’m taking part in, even though I’ve never really actually told anyone besides my wife that I’m doing it.

So anyway, there’s my recap/rant. If you participating in NaNoWriMo (or want to help me get MayNoWriMo off the ground), feel free to leave a comment!

Oh, and here’s a quick chart of my word count by day… 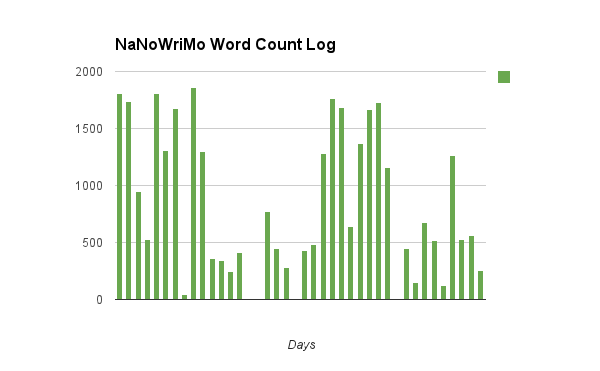 Posted on December 12, 2014, in Blog, NaNoWriMo and tagged NaNoWriMo. Bookmark the permalink. 3 Comments.