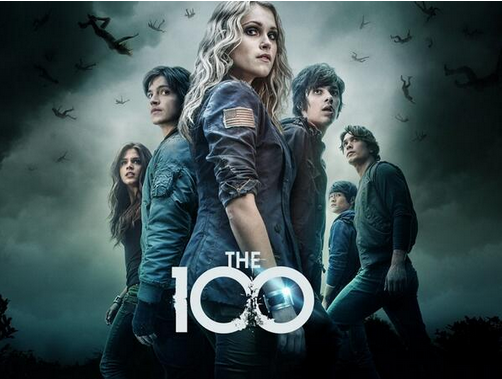 Okay, longer version, it’s not a great show. I mean, it is on the CW after all, but when it started last year (by that I mean last TV “year”), I had cut out a show that had become a bit of a chore to watch for the few good moments it provided, so I had space available if the right show came along (read: a Science Fiction show). I liked the premise of The 100 (even though the idea that somehow a bunch of space stations could be launched just in time to avoid a nuclear war is a bit of shaky leg to stand on). As soon as I saw that it was based on a book, I checked on Goodreads and almost decided to stop watching the show because the book sounded pretty awful. A lot of the things that people complained about in their reviews, though, were things that were clearly hard to pull off in a book, but could actually translate well to a TV show.

Now even though the CW was the only major network to win a Golden Globe this year, I still have a hard time taking any of their shows too seriously. Not that I don’t watch them – I’ll give anything a try if it looks interesting. I just know going in that if it’s on the CW, it’s more likely to be an adult equivalent of a Saturday morning cartoon: It’s great if you’re given permission to indulge once a week, but if you get the chance to watch a show that’s on past your bedtime you’ll take that over the cartoons in a second.

So with expectations low and grains of salt at the ready, I dove in to the 100 like the ship that took the titular group of juvenile delinquents back to the surface of the Earth.

It would be easy to nitpick the show and point out all the stuff that is dumb or poorly done, but as I was brainstorming, I realized that most of the missteps were things that a lot of scifi shows and movies have gotten wrong or done badly, so I’m going to skip to the parts that this show does well and rises above the mistakes it makes or stuff it has to gloss over to make it work…

And with that, I’d like to start with the YA tropes that the show manages to avoid (while sometimes only very narrowly), because, well, that’s a lot of what makes it good. 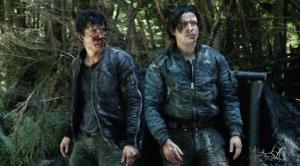 So, bravo for that. But wait – there’s more!

Besides just not being a stereotypical YA show, there are things that The 100 does well for a TV show of any genre.

So there you go. If you haven’t seen it, the first season is on Netflix, and I’d imagine the second season will be up in time to get caught up for the third season. (Also, according to Netflix, The 100 is “recommended based on my interest in Snowpiercer”, so that’s a good sign, right?)

Defiance Is What Revolution Should Have Been 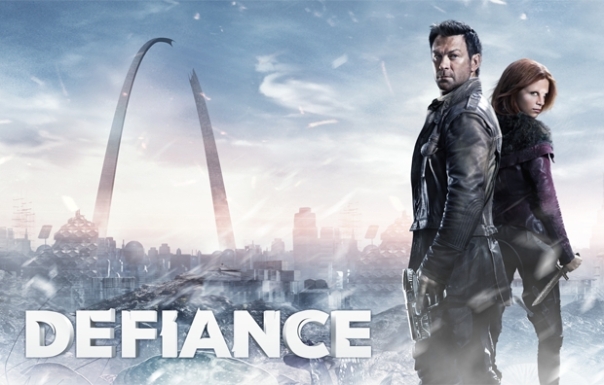 After one episode, I had some complaints about NBC’s Revolution (and yes, I tried another episode after that and it was just as hard to watch). But so far, the only thing I really don’t like Defiance is that it’s only available on the web version of Hulu, which makes it much harder for me to find time to watch it. Luckily, Syfy took my advice (in the second to last paragraph of that post) and (according to Wikipedia) are only having 12 episodes in the first season.

The show starts off in kind of a typical way: Hero and his sidekick run from danger and stumble onto a secure community of survivors. From there they introduce a lot of characters and a lot of potential conflicts between them. For a show that hints at 8 alien races inhabiting Earth alongside humans, I was impressed and pleased with the lack of explanation and “As you know, Bob” going on. Clearly Syfy knows that this isn’t their audience’s first time watching a show with aliens. It also gives them a lot of room to expand on conflicts between the aliens and the humans (since each alien race could have a different issue with Earth’s natives) and also between the aliens themselves. I’m actually more interested to see how that all plays out more than the overarching plot of “Who’s trying to destroy Defiance and why” …

Also, they totally got me with the “Come As You Are” cover at the end of the second episode. I generally love popular music when used well in TV shows, and this was a cool cover of a great song which fit the idea of the montage it encompassed (almost a little too “hit you over the head with the theme” well).

The Next Best Thing About The Roku

Besides the fact that you can watch Netflix, Hulu, and Amazon (and even NBA highlights) …

The commercials (on Hulu) are not louder than the shows. No government intervention needed.

On TechCrunch Mark Suster compares Hulu to the oil cartel OPEC. I’m not sure what this point number 2 has to do with the cartel comparison, but I think it’s one of the more interesting points of the post:

2. Limited “Targeting” of Advertisements: The great promise of the Internet for advertisers was that they were finally going to be able to deliver targeted advertisements to users because they could finally know who you were. This has become a reality with banner ads, search ads, contextual ads and Facebook ads. But not Hulu ads.

Why? They know who we are, don’t they? Yes, they do. But they generally don’t even allow advertisers to purchase ads for a single show let alone ads targeting YOU by reading your cookies on your computer. So we have ads that are even less targeted than those on television. The reason lies in protecting the high price of broadcast & cable advertising rates. They are nervous about “trading analog dollars for digital pennies.” So advertisers have to buy “run of site” ads rather than show specific ones.

It was over a year ago now when I wondered why Hulu wasn’t targeting ads to it’s users. I haven’t run the numbers on targeted ads with lower volume vs. sitewide untargeted ads, but I’d have to think there’s a price point at which you can at least break even. I mean, Facebook’s advertising platform specializes in making it easy to target people based on tons of different criteria. Again, I haven’t run the numbers, but I think Facebook is making a lot of money.

Of course, even running the numbers won’t get to the heart of the reason that Hulu is basically having it’s hand tied when it comes to being able to innovate like other technology companies. For as long as the cable and satellite providers control that major distribution channels, the networks have no choice but to hamstring the efforts of other methods of distributions (even, obviously, ones that they support). Unfortunately (for me and other Hulu users), since the user base of people watching TV via the Internet using Hulu, Netflix, Amazon, iTunes, etc. is still tiny compared to the number of people who pay companies to provide them with TV (while most of the time also paying them to provide Internet access), the networks have to tread lightly when it comes to the user experience provided through these alternate services.

Cable companies (and satellite and other pay-TV providers) are certainly scared pantless when they realize(d?) that something like Hulu could easily make networks more money by showing targeted ads for higher rates (not to mention charging people $9.99 per month without having to hand any of that over to the cable company). But they still have the market share, and therefore, the power, to make sure that networks don’t get too excited about prospects of nearly infinite riches. Netflix has run into the same problem (over and over) in dealing with movie studios who still see DVDs as their major distribution channel (although that point of view is even more short-sighted than the view that cable companies will continue to maintain their dominance in the television distribution market).

Comments Off on Hamstrung Hulu

Hulu tries to survey me about advertising

And I was more than willing to take part…

Too bad when I hit the second question their survey broke. From looking at the source code, apparently they were trying to show a video on a page that asked for my country, and either they didn’t like the version of Flash I have installed, or they just accidentally inserted a bunch of Flash and Javascript into a page that wasn’t supposed to have it and broke the whole “show continue button when the question has been answered” part of the page.

At this point, were I someone with a smaller vocabulary or less desire to type words (the blog equivalent of hearing myself speak), I could say FAIL!, or post a picture of the Hulu logo with a big red FAIL in Impact (which would be well within my Photoshop abilities). Instead I’ll just say, I was really looking forward to seeing what the 7 choices were for the charity ads that would have been displayed 250 times honor of my completion of the survey.

Posted in The New Web, TV

Comments Off on Hulu tries to survey me about advertising