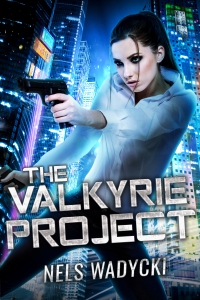 “An exciting story taking place in the not-too-distant future, this novel has surprises and wrinkles around every corner.”
— Kayak Jay, Amazon Customer Review

Men in a black hovervan grabbed Ana’s brother off the skywalk as she took him to school. That was sixteen years ago, but Ana hasn’t let it go. It doesn’t help that their parents left her to fend for herself. And it definitely doesn’t help that Memo still sends her cryptic messages from, well, somewhere.

Ana took the job at the US Intelligence Agency so she could use their resources to find Memo. Unfortunately, that also means she has to work for them.

So when a shadowy organization know as the Continuum starts going after the people that the agents of the Valkyrie Project are supposed to protect, Ana finds herself facing down technology decades ahead of its time, as well as questionable decisions the Agency has made.

She understands that there’s a lot of classified material in the Agency, but when those secrets include modifications they’ve made to the only man she’s ever considered falling in love with, Ana has to decide where to draw the line.

Does she want to fight an elusive, exceptionally well-armed enemy for a government that treats its employees like drones? Or does she really just want to find her brother?